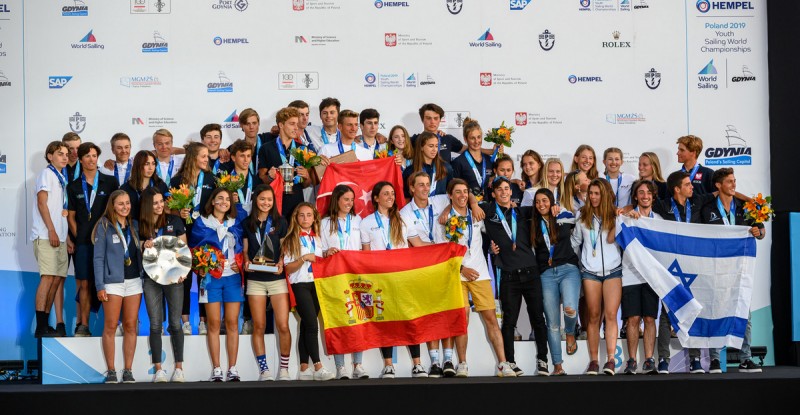 Young Sailors From All Over the World Raced in Gdynia

409 competitors from 66 countries participated in the Youth Sailing World Championships taking place in Gdynia from 15 to 19 July. “Sailing is a marvellous sport and Gdynia offers fantastic conditions to practice and admire it,” Wojciech Szczurek, the Mayor of Gdynia, said.

In its efforts to organise the event, Gdynia had beaten Shanghai and Lelystad in the Netherlands. For the purposes of the Championships, a new marina designed for 120 vessels had been built along Nabrzeże Prezydenta St. Championship participants were staying in the hotel Mercure Gdynia Centrum, situated right beside the marina.
The Opening Ceremony began on 14 July with a colourful parade of all competitors, moving from the Sailor’s Village at the end of Kościuszki Green Square to a beach in Gdynia Śródmieście. The participants were arranged in alphabetical order according to a country they represented. Polish regatta hosts were bringing up the rear. Kim Andersen, the President of World Sailing, formerly International Sailing Federation, took part in the Opening Ceremony as well.

“Gdynia has a rich regatta-related history and is a perfect spot to hold the Youth Sailing World Championships. I am positive we will witness thrilling and marvellous competitions here. It shows how much this event, basic for the existence of sailing, has developed,”Kim Andersen, the President of World Sailing, remarked.

Polish competitors participated in all nine events. In the Laser Radial class, Tytus Butowski from the Academic Sports Association of Gdansk University of Physical Education and Sport (AZS AWFiS Gdańsk) won the bronze medal.
Gdynia had organised this competition once already, in 2004. 15 years ago, representatives of 53 countries had come to Poland to compete for medals in seven events.

“The popular saying that Gdynia is a sailing capital sounds very true. We are proud of the fact that our city is where sailors from all over the world feel at home,” Wojciech Szczurek, the Mayor of Gdynia, tells us. And he adds: “Sailing is a marvellous sport and Gdynia offers fantastic conditions to practice and admire it.”

The first youth sailing championships took place in Sweden in 1971 with 16 countries participating.
The Youth World Sailing Championships were organised by the Polish Yachting Association in cooperation with the City of Gdynia and with the participation of the Ministry of Sport and Tourism.