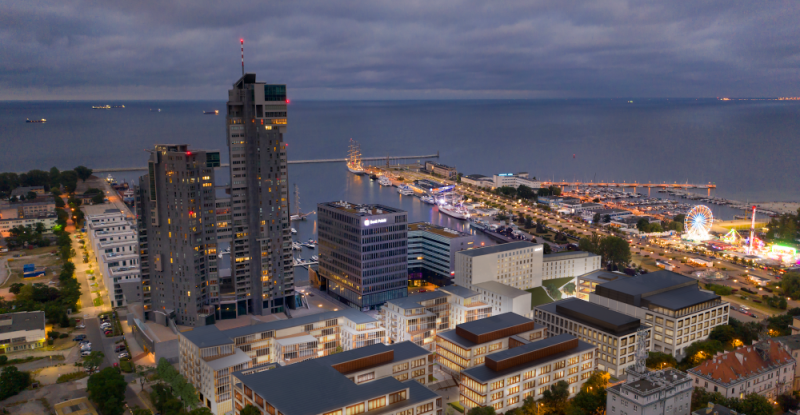 Vastint Poland is about to start the construction of another stage of the Waterfront complex. The investor has signed a general contractor agreement for the first part with Budimex SA. Four buildings with an underground garage will be erected at ul. Hryniewickiego, close to Kościuszko Square.

The investment planned is a continuation of the first stage of the Waterfront complex commissioned in 2015, consisting of two buildings accommodating offices/hotel functions, located directly next to Nabrzeże Prezydenta. The existing buildings will be extended by an additional 80,000 square meters of residential, office, and commercial space. The first stage of works is to commence soon in May. Four buildings covering a total area of 45,000 square meters are to be built first. The works will start with developing a section of the plot next to ul. Hryniewickiego, saving the access road to the Marriott Hotel from ul. Jana Pawła II.

Along ul. Waszyngtona, two office buildings with 14,500 square meters of leasable area, whereas two residential buildings, which will accommodate 126 residential and commercial premises, will be constructed and situated behind them. The general contractor plans to commence basic construction works in May 2021. The investment is scheduled to be finished in 2023.

An office building, commercial premises, two hotels with conference space, and various public and cultural facilities, including a cinema with eight screening rooms, will be built during the next stage. A publicly-accessible square adjacent to Skwer Kościuszko, where public life will be conducted, is a crucial development element. The entire complex will be supplemented by urban green space, which will add a coastal vibe and emphasize the diversity of the project’s functional zones. The investor is to finish designing this part of the complex in the upcoming months.