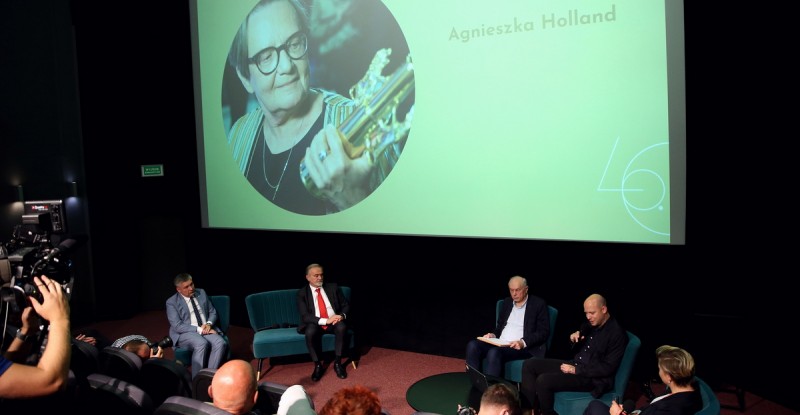 The cinema celebration begins in Gdynia

After a year’s break, the Polish Film Festival returns to its standard formula. The screenings of competition films will be held with audience participation. The organisers have prepared many additional attractions for film enthusiasts, such as exhibitions, discussions and live concerts.

The festival of the Polish cinema begins on 20 September and for six days the city will be alive with the ambience of cinema.

– I am very pleased that this year’s edition of the festival will be held in the traditional format. Above all, it is an opportunity to experience the atmosphere of a film festival. Guests of the festival, numerous meetings, exhibitions, festival screenings – this heralds a special time for the residents of Gdynia. I know that many of us really enjoy this time and eagerly participate in the events. We have a fantastic cinema celebration ahead of us in Gdynia – says Wojciech Szczurek, the Mayor of Gdynia.

The Festival will feature new Polish film productions competing in three categories – short films, micro-budget films and the Main Competition. This year, 16 films will compete for the festival’s most important award – the Golden Lions. Among them are 6 feature films which are directorial debuts.
– If I were to find any trends emerging from the Main Competition, the filmmakers have been looking to the past quite a lot. We have a great many productions that are historical films, set in the past. These are, on the one hand, titles referring to the period of World War II, but, above all, those taking place during the era of the Polish People’s Republic. These are films based on facts, real events, such as Żeby nie było śladów [So that there are no traces] by Jan Matuszyński or Hiacynt [Hyacinth], which refers to the operation of the secret police against homosexuals. We have films about Kalina Jędrusik or Najmrodzki, the Polish Getaway King, but there are also productions that refer to „small” history, such as Zupa nic [‚Nothing’ soup] by Kinga Dębska or Powrót do Legolandu [Return to Legoland] by Konrad Aksinowicz. These are family stories set in communist Poland – stressed Kolankiewicz.

Film screenings will take place at the Musical Theatre, Gdynia Film Centre and Helios cinema at the Gdynia Riviera. Some of the competition films and productions from the non-competition sections will also be screened online, on the VOD platform of the Polish Film Festival in Gdynia.
Festival organisers have also prepared many additional events to complement the festival’s thrills. Exhibitions have been prepared to commemorate two outstanding Polish directors – Andrzej Wajda and Krzysztof Kieślowski. Young filmmakers will have the opportunity to talk to experienced producers and directors.
Music is an inseparable part of film, so it could not fail to be included at the Festival. Both the Gdynia Film Centre and the Concert Shell in Grunwaldzki Square will host live concerts. The artists will perform hits of film music.