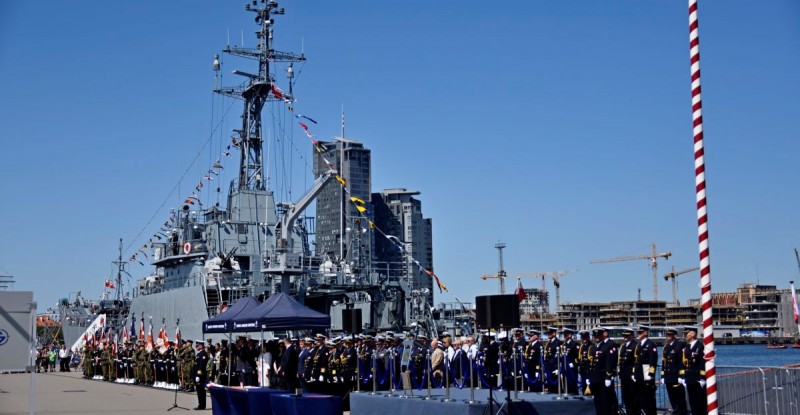 Gdynia hosts huge celebrations of the Sea Festival for the seventh time already. This year, we are celebrating for as many as nine days – from 21 to 30 June. The agenda includes i.a. free-of-charge cruises on a sailing ship, concerts, exploration of vessels and sports competition.

The first Sea Festival was held in Gdynia in 1932. Then President of the Republic of Poland Ignacy Mościcki participated in it. 2013 witnessed a throw-back to the pre-war tradition of celebrating relations between Poland and the sea, which many years ago was a main driving force for local economy and a main impetus for dynamic development of the city. Currently, the city also strongly emphasizes its strong bonds with the sea and supports maritime economy.
The Sea Festival offered an opportunity to commemorate those who died when on duty on the sea. On the first day of the celebrations, wreaths were floated onto water for this intention. A memorial plaque dedicated to thirty-three sailors, including five Poles, who died when SS “El Faro” sank, was unveiled on the Southern Pier (Molo Południowe). The vessel flying the American flag which departed from Florida, bound for Puerto Rico, sank on 1 October 2015 in Hurricane Joaquin not far from the Bahamas. Families of the deceased, representatives of the American shipowner, maritime and rescue services as well as self-government of Gdynia participated in the ceremony.

On 22 June, Midsummer Night, a night parade of yachts departed from Orłowo. Joanna Pajkowska, a yachtswoman, who i.a. managed to complete a solo trip around the world without a stop as well as won the Twohanded Transatlantic Race TwoSTAR 2017, also participated in the parade. It was possible to see illuminated vessels from the Seaside Boulevard (Bulwar Nadmorski). Sailors lit flares on boards and floated wreaths of flowers onto water.

The attractions prepared on the occasion of the Sea Festival were organized in various parts of the city. The National Marine Fisheries Research Institute allowed people to observe sea creatures under a microscope, as well as organized exhibitions, games and contests. On Saturday, 29 June, the Maritime Fair (Jarmark Morski) was organized at the Arka Gdynia Plaza (Skwer Arki Gdynia), whereas the Kashubian Plaza hosted a good and artistic fair where you could see sculptures, paintings and regional embroidery as well as listen to music bands.
The Sea Festival was also enriched by restaurant keepers from the Culinary Center Route in Gdynia who prepared a special Sea Festival menu celebrating fish from the Baltic Sea. It was also an opportunity to go on a free-of-charge cruise on one of the oldest Polish sailing ships Baltic Star which was built in 1947.

The finale of the Sea Festival topped out the celebrations of the Navy Festival. On this occasion, giant flying colors were raised on the vessels, whereas a speech and celebration of handing a banner to the youngest vessel in the Navy were held on the Southern Pier. Inhabitants and tourists were allowed to visit three vessels of the Navy: underwater ORP “Orzeł” (“Eagle”), minelayer-landing ORP “Kraków” (“Cracow”) as well as rescue ORP “Zbyszko”. It was also possible to take a close look at military vehicles and learn more about the activities of special military forces.