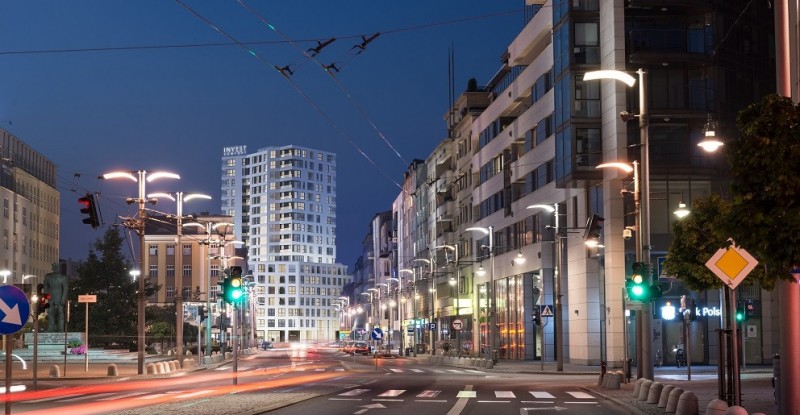 The Portova residential and commercial building has won recognition from the jury of the nationwide competition “Budowa Roku 2020 [Project of the Year 2020]”. It was ranked among the best Polish real estate investments delivered in 2020.

The competition, which has been awarding the best Polish buildings for 30 years, is organised by Polski Związek Inżynierów i Techników Budownictwa [the Polish Association of Construction Engineers and Technicians] in collaboration with the Ministry of Investment and Development and the General Office of Construction Supervision. Awards are given in eight categories. New buildings, extensions or conversions are entered into the competition.

Maria Kaszyńska, President of the Polish Association of Construction Engineers and Technicians, summed up the XXXI edition of the competition: “despite the pandemic, the construction sector acted resiliently and buildings were erected which we are proud of, which meet the highest standards and which, above all, are an excellent showcase for designers, contractors and investors, these buildings are a great advertisement for the Polish construction industry”.

The Portova complex was awarded the 1st-grade prize in the category “Residential Estates and Residential Buildings up to PLN 35 million”.
The design of the project was developed by Studio Kwadrat. The investor is the developer Invest Komfort, who is also responsible for the construction of the distinctive Sea Towers building. Portova combines tradition with modernity, with references to the traditional urban design of Gdynia. It is the third highest residential building in the city.

– We have tried to impart a quality to it that alludes in a creative way to the modernism of Gdynia. In the actual city centre, at a location where Gdynia is likely to launch new investments. We have tried to do this in a way that is cutting edge, using the latest technological advances. There has never been an opportunity to view the city from the perspective that Portova provides. This sense of connection between the city, the port and the green recreational space is particularly evident from this location – says Marek Droszcz, co-founder of Studio Kwadrat.

The complex houses 271 residential units as well as commercial premises. It has a roof-top viewing deck, which offers panoramic views of the seaside. The investor has also taken care of the common areas and created club premises as well as a gym and fitness club on the first floor of the renovated historical building. The white architecture of the building compositionally closes the axis of the Świętojańska, Plac Kaszubski and Portowa Streets, extending the city centre.

– The construction of Portova is undoubtedly the city’s decisive step northwards. A step ensuring a high urban standard for this attached area – the Śródmieście [City Centre] has received a whole quarter with residential units, services, concealed parking and recreational greenery. The overall shape of this complex of buildings of varying heights is designed in such a way that the 18-storey dominant element does not seem to overwhelm the surrounding, much lower, buildings. What is particularly delightful is that the historic modernist façade of the former office building of the famous shipping company C.Hartwig has been skilfully integrated into the complex – says Marek Stępa, head of the Heritage Protection Department of the Gdynia City Hall.