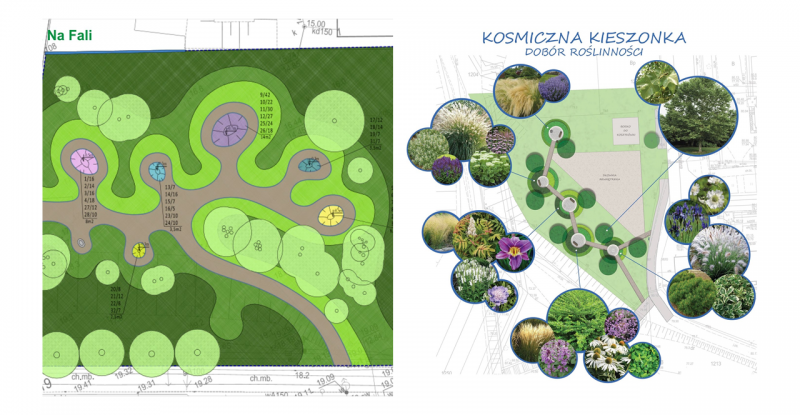 Four more pocket parks will be established in Gdynia. The residents of Grabówek, Pustki Cisowskie, Leszczynki and Pogórze will gain a green oasis in their districts thanks to the projects submitted and selected in the Civic Budget 2019.

Pocket parks are small green spaces created in urban areas. They introduce vegetation into built-up areas and provide a place of relaxation for residents. They foster social ties, increase biodiversity, enable residents to spend time outdoors and at the same time combat the effects of climate change. Two pocket parks have already been created in Gdynia – a herbal oasis at the junction of Miętowa and Tymiankowa Streets in Dąbrowa, and a green space at Starodworcowa Street in Wielki Kack. Four more are currently under construction.

– Pocket parks are part of the city’s green strategy. The new pockets will not only meet the residents’ expectations but also surprise them, as the designs are truly unique and very diverse. These extraordinary neighbourhood spaces will appear in our city by the end of 2021. They are being implemented as part of Gdynia’s Civic Budget, but also co-financed by some district councils – comments Marek Łucyk, Deputy Mayor of Gdynia for development.

The parks fit in with the current development of each district, so the sizes of the parks differ and the designs are also different. A park called „A pocket for a blanket” will be established in Pustki Cisowskie-Demptowo. It will be developed for visitors of all age groups, including people with disabilities. Its character should remind of a picnic spot, a family atmosphere in a forest setting.

A „Pocket on the Wave [Kieszonka na fali]” park will be constructed in Morska Street. Its design draws on the city’s coastal character. Flower meadows with melliferous plants will be created here, providing shelter for beneficial insects. The geometry of the park space will be fluid, as if undulating, which is to evoke associations with the seaside character of Gdynia and the waves rushing ashore. There will also be mini rain gardens.
The seaside landscape will also provide inspiration for the park located in Grabówek in Kapitańska Street. The covering of composite boards will resemble a pier and the sandy surfaces will remind of a beach, surrounded by vegetation consisting mainly of ornamental grasses.
A „Space Pocket [Kosmiczna kieszonka]” park will be built in Pogórze. This project is inspired by outer space. It will include squares symbolising stars made of luminescent concrete, that glow after dark. A telescope will be set up in the park to enable observation of the night sky.
Residents will be able to enjoy the beauty of these small parks later this year. In all the spaces, the residents will find one common element that unites them – the enigmatic symbol. It will take a different form in each location. It will therefore be worth to take a walk, visit the new parks and discover these mysterious symbols.