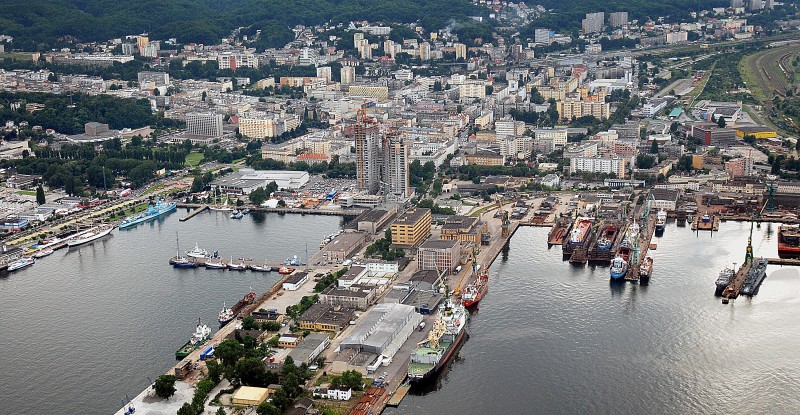 The work involved in the new investment project on the Fishing Pier has been started by the owner of the area, Polski Holding Nieruchomości SA. The preparatory works include the demolition of old post-industrial buildings at the Cutter Quay (Arkadiusza Rybickiego street) on the area of 11 thousand sq.m. The demolition operation is being supervised by the city monument conservator, in order to save the most interesting details, including doors, flagpoles, and balustrades. The investor at this site will be mLocum Developer, who intends to start the construction of the Yacht Park this year. The project comprises six residential buildings together with a modern yacht marina.

The first stage of the investment project is to be completed by the end of 2017. 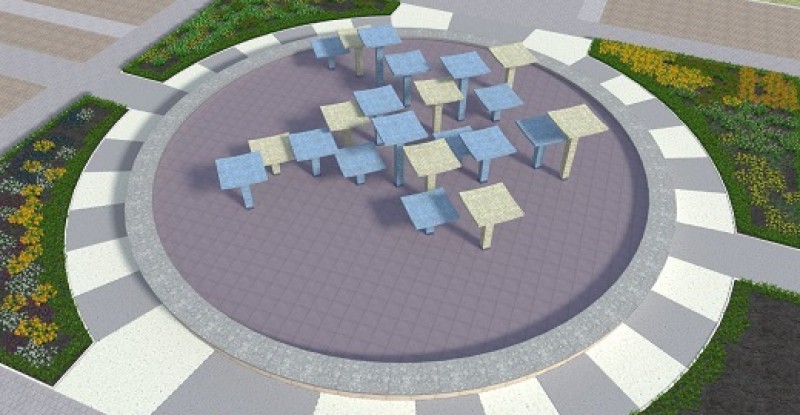 Design a city in InfoBox

In the Observatory of Changes in Gdynia – InfoBox – you can play a part of an urban planner and design virtual space yourself due to a new multimedia application.

The new application presents an interactive city model owing to which you can visit the whole city on a big touch screen, learn about its most intriguing places, find out where car and bicycle parking places are or find trolleybus routes. Moreover, the application has got additional features that make it an extraordinary attraction for visitors. You can organise city’s space, become an urban planner and e.g. develop an empty square into a field of greenery or construct a new building on an empty lot. The application can also be used as a communication platform between an office and citizens, because it enables to exchange their opinions by means of answers obtained from prepared questionnaires. For organised groups of children and teenagers, the InfoBox staff will conduct classes presenting all the application functions.

The city model along with the applications were created by StructView, a company form Gdynia, by order of the city. It can be used by individuals within Gdynia InfoBox operating hours. Organised groups, including children and school-age youth, can use it after having contacted the InfoBox member of staff Marta Juraniec in advance, 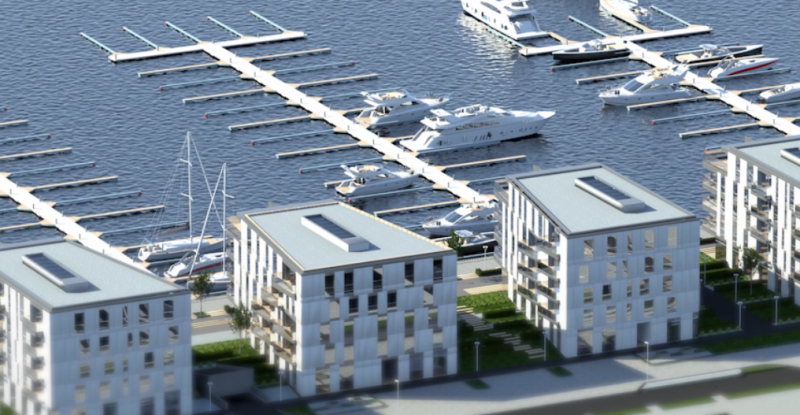 Yacht Park – the official name of the investment project

The Fishing Pier, a prestigious part of the Gdynia’s Seaside City Centre, will see the unique and luxury residential estate constructed together with a modern yacht marina and a pedestrian path with boutiques and restaurants. A location that is worth visiting, open to the local community and tourists, and fully integrated with the rest of the city. The investor has announced the official name of the investment project – Yacht Park, which refers to the location of the estate and the planned modern marina, integrated with the residential complex. According to the Investor (mLocum), the Yacht Park in Gdynia is a unique location in Poland and Europe and the only such a project in Poland, situated in the beautiful sea scenery with views of mooring yachts and the modernist City Centre. Comfortable apartments will be constructed there, with large glazing right above the water surface level, to give its inhabitants the impression of living on a luxury boat.

A website, a logo, and a video promoting the Yacht Park are a part of the marketing activities:

Sea City at the MIPIM fair in Cannes

Gdynia has presented a vision for the development of the Sea Downtown at the largest investment fair – the MIPIM in Cannes. The city showcased its investment capacities in a shared pavilion of the Gdańsk, Sopot, Gdynia Metropolitan Area.

Together with the representatives of Semeko, a renowned developer, Gdynia presented a design for the development of the Międzytorze District, including a model of future land development. The idea to co-create a marine city center in a unique location has raised considerable interest among investors, which resulted in numerous cooperation offers.

The Sea Downtown area, strategic for the City of Gdynia, is presented under the Sea City brand on European markets. At the Cannes fair, the offer presented was the outcome of marketing cooperation of the city and seven strategic partners implementing the most advanced investment projects in this part of Gdynia.

At the fair, the City of Gdynia was represented by Katarzyna Gruszecka-Spychała, the Vice-President of the City, who took part in the “Poland Today” conference and discussion devoted to Poland’s investment potential. The debate moderated by a Financial Times correspondent was attended by Deputy Prime Minister Mateusz Morawiecki and the President of ABSL Jacek Levernes, as well as the President of the NOER investment group, Prof. Alexander Goepfert.

The 27th edition of MIPIM was attended by approximately 21 thousand representatives of the real estate market, nearly 5 thousand investors, 1.5 thousand architects, 370 political leaders and more than 400 journalists. Nearly 2.5 thousand companies presented their portfolios at the French Riviera, and a total of 89 countries were represented at the event.

Tender for a New Marina at the Southern Pier Launched

Tender proceedings were commenced in order to find the general contractor for the construction of the New Marina in Gdynia. The company which is running this project assumes that the contractor will be selected in April 2016.

The invitation to bid was sent to 14 developers who expressed their interest in the project. Furthermore, the investor filed an application for building permit. The New Marina is to be completed by the end of 2017. The estimated cost of the project in PLN 160 million.

The New Marina, with its expanded infrastructure for yachtspeople, will serve as the main base for the participants of the ISAF Youth World Championships in 2019, a big yachting event to be hosted by Gdynia. The Marina will provide space for ca 260 yachts, while the conference and hotel area along with related infrastructure will accommodate ca 500 yachtspeople. Gdynia-based yachting clubs will have their offices in this area, too.

The project is run by a company called Nowa Marina Gdynia.

The Polish Railway Station in Gdynia, a symbolic place which saw many Poles leave their country for good, will host a new museum to commemorate those tragic events. It will be the only museum in Poland about Polish emigration.

It was launched by the local government of the City of Gdynia, who wanted to commemorate the place used by hundreds of thousands Polish people to evacuate before the looming Second World War. The building, Modernist in style, was erected in 1933 and back then was one of the most innovative passenger traffic facilities. It was seriously damaged during the war and now it gained a fresh new look. The Station hosts the Museum of Emigration, which runs a number of cultural and educational emigration-related projects. The Museum initiates discussions, runs workshops, educates about the Polish emigrants and documents their stories. Each Saturday, trained voluntary workers guide tours around the permanent exhibition.

Gdynia Film Centre won the “Best Polish Architectural Design of the Year” award. The project had been developed by the Gdynia-based company ARCH-DECO which received the main prize in the architectural design category of Eurobuild Awards 2015 awarded by real estate market professionals.

Commercial properties and public properties which had been put to use between October 2014 and September 2015 were put forward for the “Architectural Design of the Year” award in the Eurobuild Awards 2015 competition. Three projects were shortlisted in the first voting by a jury made up of real estate industry experts.

The three buildings on the shortlist were: Gdynia Film Centre, JEMS Architects’ Katowice International Conference Centre and Kuryłowicz & Associates’ National Forum of Music in Wrocław. More than 900 attendees at the Eurobuild Awards celebratory gala in Warsaw, all real estate industry experts, cast their votes for the facility in Gdynia.
The Eurobuild Awards have been awarded for the sixth time. The purpose of the competition is to highlight the best architectural projects realised and the best real estate companies operating in Central and Eastern Europe.

The Film Centre was opened on 13 September 2015 before the start of the Gdynia Film Festival. The Film Festival was held in the new facility with the use of the welcoming space around the Centre.

The building comprises a three-room cinema studio, a café, a restaurant, a bookstore, and an art gallery. Yet above all, Gdynia Film Centre is the new home for Gdynia Film School. It offers fully-equipped lecture halls, film-editing suites, workrooms and showrooms.

Hotel with a Seaview

The 4-star Courtyard by Marriott hotel, located at the President’s Embankment in Gdynia, has been open to guests since 4 June 2015. Its exceptional location with a view of the Gdansk Bay is much appreciated by the visitors; ever since its opening, the hotel has been popular among leisure and business travellers visiting the Tri-City.

The Courtyard by Marriott Gdynia Waterfront hotel is situated near the Kościuszko Square, a hotspot for tourists and a perfect place for business meetings in the very heart of Gdynia. It is only a short walk to the beach and the Seaside Boulevard, and just 500m from the Musical Theatre. It is one of the first buildings constructed as part of the Gdynia Waterfront complex. The hotel has eight floors of 200 modern and comfortable rooms. The top floor contains business rooms with panoramic views of the sea. A sun-soaked viewing terrace on the third floor of the building offers beautiful views of the bay. The hotel has a modern Conference Centre with 9 rooms providing generous space for big business events. The hotel restaurant GåRD – Nordic Kitchen offers both Scandinavian and international dishes. A fitness studio overlooking the sea is open 24/7 for hotel guests. The hotel offers bike rental service to the fans of bicycling which is a great way to explore the city. Each air-conditioned room is equipped with 40″ LCD TV, a working desk, and tea/coffee making facilities. Large windows allow more light in, or even, in Premium and Business rooms, a superb view of the Gdańsk Bay. High-speed wireless Internet is available throughout the hotel.

One Step Closer to a New Marina

A new building project is going to be launched in the Sea City district of Gdynia. Early next year the construction of the New Marina of Gdynia will begin. The city authorities, the Polish Yachting Association, Gdynia’s sailing clubs and the Polish Scouting and Guiding Association (ZHP) have signed an agreement relating thereto.

The Beniowski Embankment shall host a modern haven for sailors arriving in Gdynia by water. Experienced sailors will enjoy the access to training rooms, sanitary facilities, a fitness studio with a SPA zone, and a hotel offering 200 rooms. The marina will also be a new home for the local sailing clubs. The architecture of the buildings designed by Studio Kwadrat will highlight their exceptional location. The facility will feature roof terraces and glazed walls offering magnificent panoramic views. The company Nowa Marina Gdynia will be responsible for the project implementation. The complex will increase Gdynia’s chances of playing host to the 2018 Sailing World Championships.

More former shipyard areas have attracted an investor. Międzytorze in Gdynia, covering an area of more than 14 hectares, will be profoundly transformed by PKP SA, the owner of the site, and SEMEKO Grupa Inwestycyjna SA from Gdynia.

The investors plan to comprehensively revitalise and redevelop this terrain. The area over which rail tracks extended to the port will be completely changed, thereby becoming the centre of the city, providing people with a wide range of service facilities and residential buildings. The purpose of the revitalisation of this area is to completely change the character, functions and use of this area. Hotels, office space, commercial facilities, and most of all residential buildings, will attract inhabitants and tourists to this part of the city. The total residential and commercial area comes to 345 thousand sq m.

The project is divided into several stages and the whole investment is to be completed by 2026. Construction work may begin as early as in 2017. The value of the project is estimated at approx. 700 million EURO.