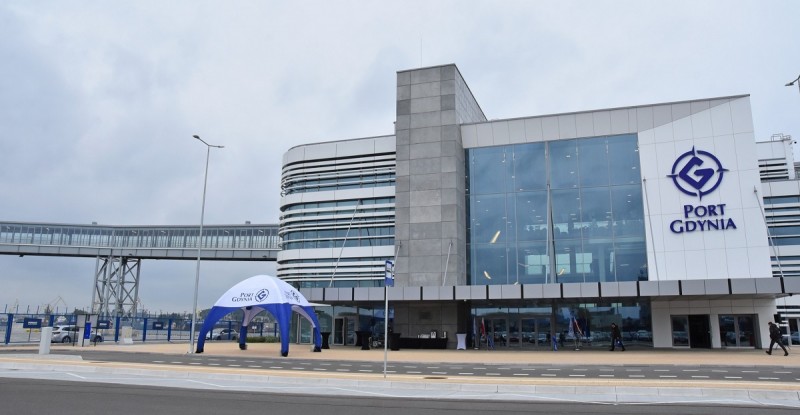 Large ferries with a length of up to 240 metres will be able to dock in the port of Gdynia, at the new terminal that has just been completed. The investment valued at nearly 300 million PLN included the construction of a passenger terminal building, a ramp, a warehouse, car parks and a manoeuvring area, as well as the reconstruction of the quay. It is currently the most technologically advanced facility in the Baltic Sea region.

The new terminal will enable faster docking upon entry into port, as the facility is located close to the main entrance, at the Polish Quay. It will also allow for admission of longer vessels than previously.

– It is a public terminal. It is designed to serve more operators than before, at the terminal that operated deep inside the inner port of Gdynia. Currently, we have four slots at our disposal, which means we will be able to service four ferries per day. It is worth pointing out the location of this terminal, it is much closer to the main entrance to the port. The largest ferries that will be able to call here can reach up to 240 metres in length. We estimate that they will not need to spend more than 120 minutes at the quays – said Jacek Sadaj, CEO of the Port of Gdynia Authority.

As part of the investment, a beautiful building was constructed, whose architecture refers to the Modernist tradition of Gdynia. A warehouse building comprising 7,000 cubic metres was also erected. Manoeuvring areas and vehicle parking covering an area of up to 6.5 hectares were also created. The quay has been extensively redeveloped, a special ramp has been provided, and the rail and road infrastructure has been upgraded with technical installations to reduce emissions from ferries moored alongside the quay. The new terminal is located close to the city centre, which is a great advantage for passengers.

– The relocation and construction of a new ferry terminal is, on the one hand, an opportunity to increase the volume of both passenger and freight traffic entering our city by ferry, but it is also the location of the terminal, which will enable our guests to take a longer ‘stroll’ to the city centre, to Świętojańska Street. These are not only new features, but also an important component of the economic development of the port and the city of Gdynia – said Wojciech Szczurek, the Mayor of Gdynia.

The terminal will be used by various operators. In addition to the Swedish carrier Stena Line, present in Gdynia since 1995, it will also be possible to board vessels of the Polish Baltic Shipping Company [Polska Żegluga Bałtycka], also known as Polferries. This means that new passenger connections to Sweden are likely to be on offer. The new terminal is also expected to provide more ro-ro connections. The first passengers are likely to arrive at the new terminal in early 2022. The recently completed public ferry terminal is currently one of the most advanced facilities of its kind in the entire Baltic Sea region.