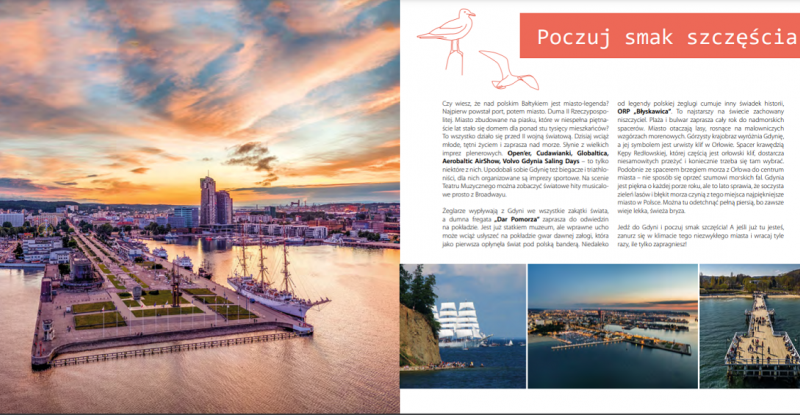 Where to go for a walk, what to see, what exhibitions to visit and what dishes to try. A new city guide to Gdynia that promises to unveil the wonders of the city is now available. Residents will also benefit from practical suggestions for interesting leisure activities in the city.

The new “Przewodnik po Gdyni [Gdynia city guide]” is available in Polish and English. It was prepared in two interactive versions – for mobile devices and for the computer. The publication provides links next to the described places and events, which take you directly to the website, Facebook profile or location on Google Maps. The publication will also be published in a printed version.
The guidebook describes 12 of Gdynia’s most important attractions. It also includes tips for exploring the city over the weekend. Two routes were prepared which can be completed in one day. If someone would like to take a break from the hustle and bustle of the city, Gdynia offers many such opportunities. Beautiful beaches, mysterious cliffs and moraine hills of the Tri-City Landscape Park and numerous parks encourage relaxation. Gdynia is also tempting from the culinary point of view. Restaurants offer dishes from virtually every part of the world. There will also be plenty of regional Kashubian dishes prepared in a contemporary style.

– “Przewodnik po Gdyni [Gdynia city guide]” is the latest in a new series of publications promoting the city. The items we recommended include some of the greatest Gdynia attractions as well as lesser-known symbols of maritime Gdynia and plenty of interesting facts that will give you a fresh perspective on the city. One could not fail to mention the Kashubian roots of Gdynia or the ‘ships on land’, namely the pearls of Gdynia’s modernism. Gdynia also has kilometres of beautiful, sandy beaches and magnificent forests, which constitute 46% of its area, and as many as four nature reserves, which is why we particularly encourage people to actively use the educational paths, the walking and cycling trails or visit the Forest Botanical Garden in Marszewo – said Katarzyna Gruszecka-Spychała, the Deputy Mayor of Gdynia for Economy.

The guide tells us what makes Gdynia special and what makes the city highly rated in rankings assessing the quality of life. The city also offers many attractions for the youngsters, so families will find plenty of ideas for entertaining their children. Older visitors will probably be interested in the extensive cultural offer and the list of the most important recurrent events organised in the city. Gdynia hosts cultural events that are known nationwide and abroad, and which annually attract many visitors to the city. But the city also creates excellent conditions for the development of entrepreneurship, with a thriving service sector for business. The publication moreover includes plenty of practical information on how to get around the city as well as some useful contacts. A major asset of the guide are the beautiful photographs and the modern graphic design, consistent with previous publications about the city. The publication also includes a mention of the Śródmieście Morskie/Sea City as one of the most important investments in the city.

It is really well worth taking a walk around Gdynia with a Guide.