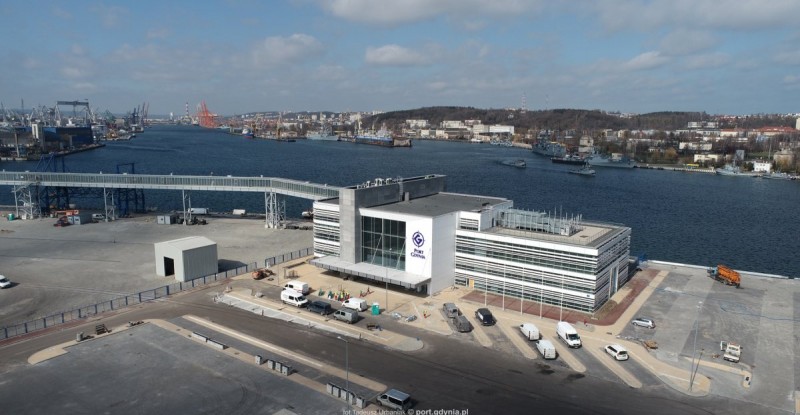 A new ferry terminal, equipped to receive large cruise ships, located at the Polish Quay in Gdynia will be ready in June, Port of Gdynia Authority has announced. An additional advantage of the new investment is the possibility to supply ships with electricity while at berth. The Port of Gdynia is the first in Poland to introduce this innovative system, thus following the „green port” principle.

This is the largest investment the Port has made in 50 years. The historic Polish Quay was demolished and replaced by a new quay with the necessary infrastructure. The terminal building has already been constructed, as well as a ramp for mooring vessels with a length of up to 240 m, which is the target size for ferries serviced on the Baltic market. The first ships will be able to enter the Port in September this year.

Vessels remaining in the harbour will be powered by electricity, so that the engines can be turned off, which will reduce noise levels, eliminate vibrations, but above all will have a positive impact on air quality. Indeed, studies have shown that 10 hours of electricity use in port by a large cruise ship reduces emissions of CO2 by 22 tonnes, nitrogen oxides by 1.4 tonnes and sulphur oxides by 1.2 tonnes.
This technology was first used in 2004 at the Port of Los Angeles in the United States. The system is already in place in the Swedish ports of Karlskrona, Gothenburg and Stockholm. This year, this ecological solution will also be applied in Gdynia.

– A thriving business combined with care for the environment is nowadays a standard which attracts new customers. When making strategic investments, we must not forget about the surrounding environment. The construction of the Public Terminal in Gdynia is a large-scale undertaking, which we are implementing as part of sustainable development – comments Adam Meller, President of the Management Board of the Port of Gdynia Authority.

The shore-side power supply for the vessels will have a capacity of up to 3.5 MW, thus allowing the ferry’s batteries to be recharged quickly without the need to turn on the diesel engines. The Gdynia port will also be able to receive vessels with full electric propulsion.
The Port of Gdynia is a base node of the trans-European TEN-T network and a category A port. It is one of the two Polish seaports that is linked to Sweden by the Gdynia-Karlskrona Motorway. It plays a key role in the Baltic-Adriatic corridor and is one of the 9 key Transport Corridors of the TEN-T network.

The location of the Public Ferry Terminal at the Polish Quay will provide a connection to the most important local and national roads, which are an important element of the transport corridor for international trade. The value of the investment is approximately PLN 292 million, of which the EU co-financing amounts to PLN 116,837,137.67.