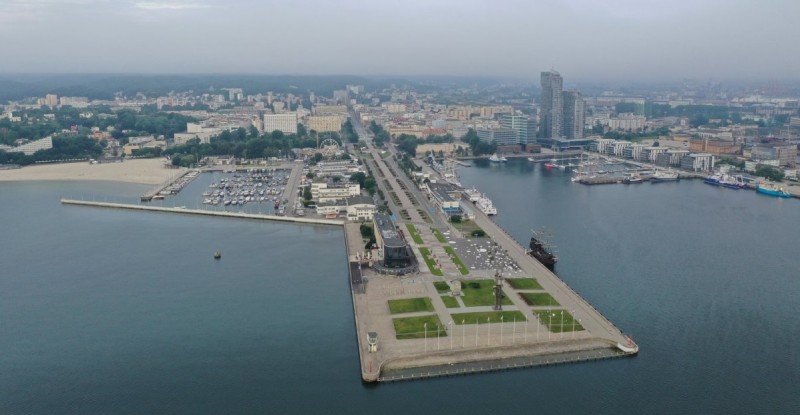 City creates the pier of the future

The Gdynia self-government intends to change the development of the South Pier[molo Południowe], John Paul II Avenue[aleja Jana Pawła II] and Kościuszko Square[skwer Kościuszki]. A competition for the new development of this attractively located site has just been announced and architects are invited to submit their ideas for exploiting its potential.

The most important compositional axis of Gdynia will be redesigned. The area, which is frequented by locals and tourists, will acquire a new look. The President of Gdynia, Wojciech Szczurek, would like this space to meet the expectations of residents and visitors even better.

– I see the need to make it more attractive, to integrate representatives of different environments and age groups, and to combine complexity and multifunctionality by linking its cultural, recreational and tourist functions together. This space identifies Gdynia, brings together residents and tourists during sporting and cultural events, as well as during everyday activities – said Wojciech Szczurek, President of Gdynia.

Architects will be able to present their vision for the development of this much-loved urban space. However, the city has set its expectations. The city officials would like the proposals to refer to the modernist character of the Gdynia City Centre and be its creative interpretation. „The Pier of the Future”, as the area was defined in the tender, should reflect the traditions and ambitions of Gdynia as a modern and open city.

– The competition is not a guarantee of the only and perfect solution, but it is the best method known for exploring ideas, concepts or visions. And it always opens up opportunities for debate and dialogue about the city, which is particularly important in relation to such an exceptional space – emphasizes Dr. Eng. arch. Bartosz Macikowski, President of the Council of the Pomeranian Regional Chamber of Architects of the Republic of Poland [Rada Pomorskiej Okręgowej Izby Architektów RP].

The South Pier[molo Południowe] is where many families spend their free time. The proposed functional and spatial solutions should therefore promote social interaction and urban activities at any time of the year and regardless of weather conditions. The new space should also prioritize strong aesthetics, place identity and use of natural surroundings, and take into account the needs of different age groups and people with disabilities.
The deadline for submitting designs is November 15, 2021. The proposals for the Pier of the Future will be evaluated by an eight-person jury, which includes, among others, Katarzyna Gruszecka-Spychała, Deputy Mayor for Economic Affairs, Renata Stelmach, City Architect, and Filip Springer, a well-known reporter who focuses in his work on the aesthetics of public spaces and architecture. The jury is chaired by Prof. Ewa Kuryłowicz, PhD, Eng. architect, from the Warsaw University of Technology. Results of the competition are expected to be announced on December 10, 2021.
The awarded and prizewinning works will be an inspiration for determining the development and future transformation of the South Pier[molo Południowe] area, Kościuszki Square[Skwer Kościuszki] and the neighbourhood of 10 Lutego Street. They can also be used, for example, in formulating the provisions of local legislation, as well as in other competitions or investment activities concerning the area.