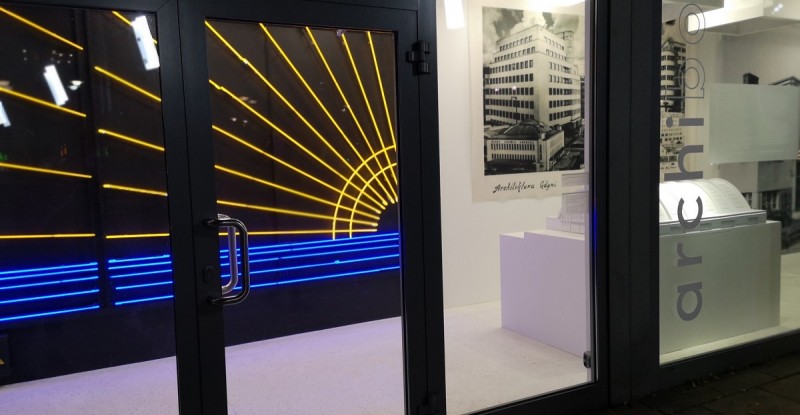 ArchiBox – the tale of modernism

A new venue showcasing the icons of the city’s modernist heritage was established in Gdynia. And more importantly, it is accessible directly from the street. The examples of modernism presented in the ArchiBox can be viewed through the window. An excellent idea for the time of the pandemic.

Gdynia’s efforts to look after the modernist architecture of the city have been appreciated on numerous occasions. The comprehensive programme for the protection and promotion of modernism was also appreciated by the National Heritage Institute, which singled out the city in the „Local Government for Heritage” competition. The initiative rewards municipalities for developing and implementing comprehensive national heritage buildings care programmes. Gdynia attracted the attention of the jury with its pioneering activities in recognising and promoting the significance of its modernist buildings.

A new venue where modernist architecture in the city is brought closer to the public is the ArchiBox, located in a small, glazed pavilion between the observation tower and the InfoBox. The exposition has been arranged in such a way that it can be viewed directly from the street, through the large windows. This particular way of spatial arrangement was the idea of Marek Stępa, head of the Heritage Protection Department at the Gdynia City Hall.

„ArchiBox is a venue which forms part of the familiar InfoBox, well known to Gdynia’s residents, and where we intend to show Gdynia’s modernism in a variety of ways. We wish to showcase the top achievements, the most interesting buildings and their designers. We also would like to demonstrate their links to the most iconic achievements of European and world modernism. This venue is intended to serve not only the residents of Gdynia but also all of the Gdynia visitors. We will be following the inspiring concepts and ideas. We will focus on showcasing both the most famous and the lesser known buildings which are worth seeing. We also want to strengthen Gdynia’s residents awareness of the significance of this kind of architecture. We know that the number of people who come to Gdynia to learn about modernism is growing. Gdynia is ideally suited for the study and appreciation of modernism in architecture,” says Marek Stępa, head of the Heritage Protection Department at the Gdynia City Hall.

The exhibition is decorated with a characteristic neon sign representing two ocean liners on the sea, lit by the rays of the setting sun. The project refers to the minimalist style of pre-war graphics. It was designed by the Warsaw artist Maurycy Gomulicki and commissioned by the curatorial team of the POLIN Museum of the History of Polish Jews for the exhibition „Gdynia – Tel Aviv”. The project refers to the shipping history of the city, from where dozens of ships left Poland to arrive at many world ports. In the December dusk, a colourful neon sign illuminated the space between the InfoBox and the viewing tower.

Archibox was established in cooperation with the Museum of the City of Gdynia, the AOS Studio of Architecture and Wytwórnia Studniak. Currently, a part of the exposition prepared for the exhibition „Gdynia – Tel Aviv” has been put on display.