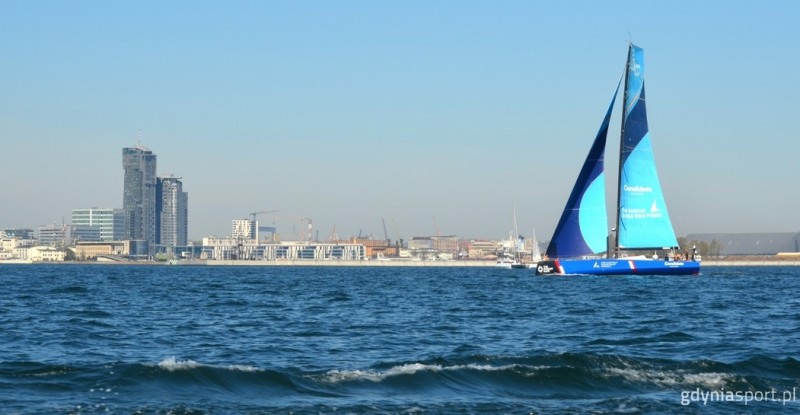 Four ocean-going VO65 class yachts could be seen competing in Gdynia. The boats taking part in the first leg of The Ocean Race Europe Prologue arrived in Gdynia from Klaipeda. The crews were stationed here for three days, during which they held four inshore races for the Mayor of Gdynia Cup within the Bay of Gdańsk.

The boats departed from Klaipeda on 10 May, starting their first leg of The Ocean Race Europe Prologue. Four crews took part in the race – Lithuania’s Ambersail 2, Team Childhood 1 from the Netherlands, Ocean Racing Team from Austria and a Polish team from Sailing Poland. The Polish crew was the first to arrive in the port of Gdynia. The battle for second place went on until the very end. Finally, the Lithuanian yacht Ambersail2 won it. During their three-day stay in Gdynia, the vessels also competed in four inshore races for the Mayor of Gdynia Cup, which also went to the Sailing Poland crew.

– This is a momentous event in the history of Gdynia and Polish sailing. This is the first time that the high-speed racing yachts VO65 have arrived in our city – comments Tomasz Chamera, the President of the Polish Sailing Association and Vice-President of World Sailing. And he adds: – We, as the Polish Sailing Association, will always support such initiatives. This is a great promotion, which helps to make sailing more popular, especially among young sailors, who can gain experience from veterans of transoceanic racing and, above all, have fun with sailing, proving to themselves and others that this is a great sports activity for developing a wide range of skills.

Marek Łucyk, Deputy Mayor of Gdynia for Development, pointed out the city’s close ties with sailing.

– I am proud that once again we can host such excellent sailors and a top-class regatta in Gdynia. I appreciate the great commitment of all those who have contributed to the success, which is undoubtedly the creation of such a strong Polish race crew and getting a yacht, that is closely associated with our city, ready for competition. Knowing the professionalism and perseverance of Mr Tomasz Chamera, the President, I am convinced that a lot of good things are still in store for us, as far as sailing and Gdynia are concerned – he added.

The crews left Gdynia on 12 May, thus completing the Gdańsk Bay leg of the race. The yachts set off for Stockholm, passing the turning point marker buoy in Sopot on the way. The route of The Ocean Race Europe Prologue continued through Cascais, Alicante and on to Genoa, where the yachts arrived on 13 June. The regatta is a prelude to the European leg of the world’s toughest fully crewed circumnavigation race, which starts on 27 May in Lorient, France.